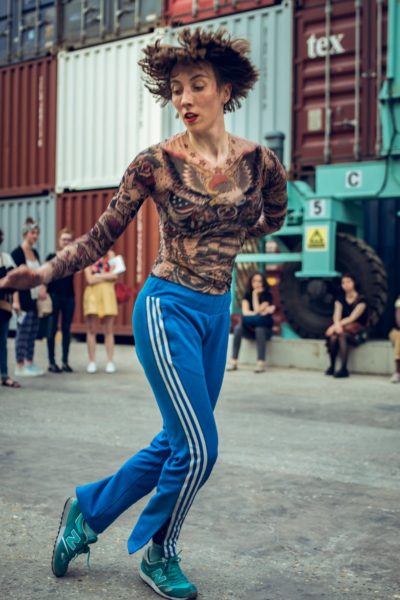 Lucy Suggate is a Choreographer from Yorkshire.

Making work since 2003, Lucy has gained national and international recognition for her unique, irreverent style. Producing an articulate and engaging body of work, in 2005 she became Associate Artist at Yorkshire Dance. In 2006 Lucy’s piece Postcard was selected for the Final of The Place Prize. In 2007 Lucy was invited to join Daghdha Dance as an Artist in Residence at their unique performance church in Limerick, Ireland. A unique opportunity to work with choreographer Michael Kliën and a three-year research and development into dance and choreography followed. In 2010 Lucy joined the Dance Base program for the Edinburgh Fringe with her solo work Latin Beach and Liquid Gold and in 2012 with new work Bonedust, both were awarded five stars. So far Lucy’s work has been performed in Italy, Lithuania, Ireland, France, Sweden, Finland Denmark, Germany, Poland and Spain

In 2013/2014 Lucy became a Modul Dance Artist, supported by Mercat, Graner, Dansehallerne, BoraBora and Arts Council England’s Artists International Development Fund, to produce a durational solo that went on to inform her work Pilgrim. Pilgrim has been presented internationally at Seoul International Dance Festival, Sonar Festival, Nottdance2015, and the Tanzsolo Festival in Bonn.

One of Lucy’s most recent works Swarm Sculptures is currently touring the UK. It has recently been presented at Nottingham Contemporary, NN Contemporary Art and as part of Juncture in Leeds. The next performances will take place at De Montfort University in November.

Swarm Sculptures is a durational movement installation. Influenced by swarm intelligence as a choreographic process and the body as sculpture, the work takes the infectious nature of movement to transform the single human form into a communal and collective body.