If watching is your thing, join us for a rich array of provocative performance.

Begin your Nottdance at Nottingham Contemporary by joining Matthias Sperling investigate the relationship between mind and body in his performance lecture Now That We Know, exploring a hypothetical future in which that connection is clarified. After exploring a hypothetical future, head on over to the festival hub at iC4C and be brought back down to earth by celebrating energetic alliances between female dancers and musicians in Brocade.

You’ve just enjoyed a diverse array of performances to kick off Nottdance but don’t stop there. Make sure you continue to add to the mix by heading over to Nottingham Lakeside Arts for H2Dance’s Staging Ages on Thursday. Don’t forget to join them earlier for a pre-show Conversation.

Okay – you’ve made it to the end of the week. To celebrate Friday feeling, our partner venues have two treats lined up for you. See Franco B use both his body and a punch bag as democratic apparatus in Milk + Blood, appropriating the sport of boxing for thirteen two-minute rounds of mental and physical grit at Backlit Gallery. Then across the city our friends at Nottingham Playhouse are hosting Lost Dog’s Paradise Lost, a re-telling of the story of the beginning of everything inspired by Milton’s Paradise Lost, told through words, music and dance.

You’ve just woken up from a culture filled Friday evening. The weekend arrives; our advice would be to enjoy your weekend in a refreshing way with the startling and sublime dance duet, Eleanor and Flora Music by Nora. It reimagines Morton Feldman’s musical score for John Cage as a playful landscape of touch and synchronically.

At Our Festival Hub:

Beyond the festival hub at Dance4’s very own international Centre for Choreography (iC4C) there is an array of performances across the city at many of our partner venues.

If you are heading to a ticketed event to Nottingham Playhouse, Nottingham Lakeside Arts or Nottingham Contemporary, don’t forget that you can buy a £2 return ticket for the tram!
MATTHIAS SPERLING (UK)
Now That We Know
WEDNESDAY 8 MARCH 5.30PM – 6.30PMNOTTINGHAM CONTEMPORARY
NOTTNGHAM NG1 2GB
Tickets: £10 (£8 concessions)
Suitable for 12+ 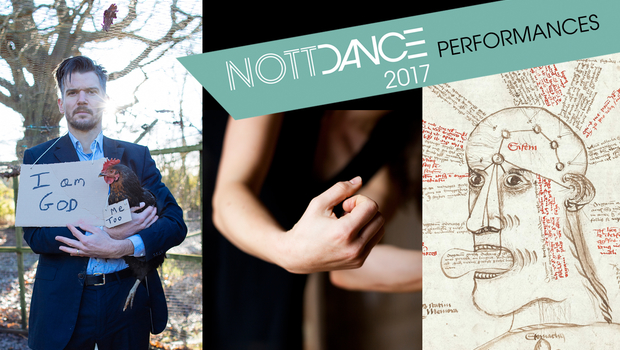