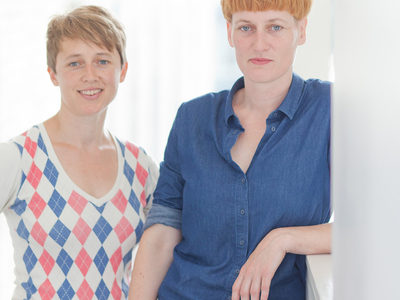 H2Dance is choreographer / performer duo Hanna Gillgren (SE) and Heidi Rustgaard (NO). They will present Staging Ages on Thursday 9 March as part of Nottdance 2017.

The work of H2Dance sits in between performance and dance and can be characterised as interdisciplinary, often taking a humorous approach to serious subject matters. Recurring themes in their choreography are group behaviour, conformity, power balance and manipulation. The notion of group versus the individual, the public and the private is investigated through mediums such as movement, voice and video, performed in and outside of the black box. Hanna and Heidi have co-created eight dance pieces, eleven touring shows, two dance films and several successful high quality participatory dance projects in the UK over the last 16 years.

This year they will be making a new interdisciplinary work 20 Strangers, to be premiered Autumn 2017. H2Dance performs regularly in the UK, Norway and Sweden and have taken up residencies at Dance4, METAL, Pavilion Dance, Dance East, DanceDigital, The Place in the UK, DansiT, SEANSE, Union Scene and Scenerommet in Norway, Nordic House Iceland, Devir CAPa (Centro de Artes Performativas do Algarve) Portugal, Taipei Artist Village Taiwan and Gaara Dance Foundation in Kenya.